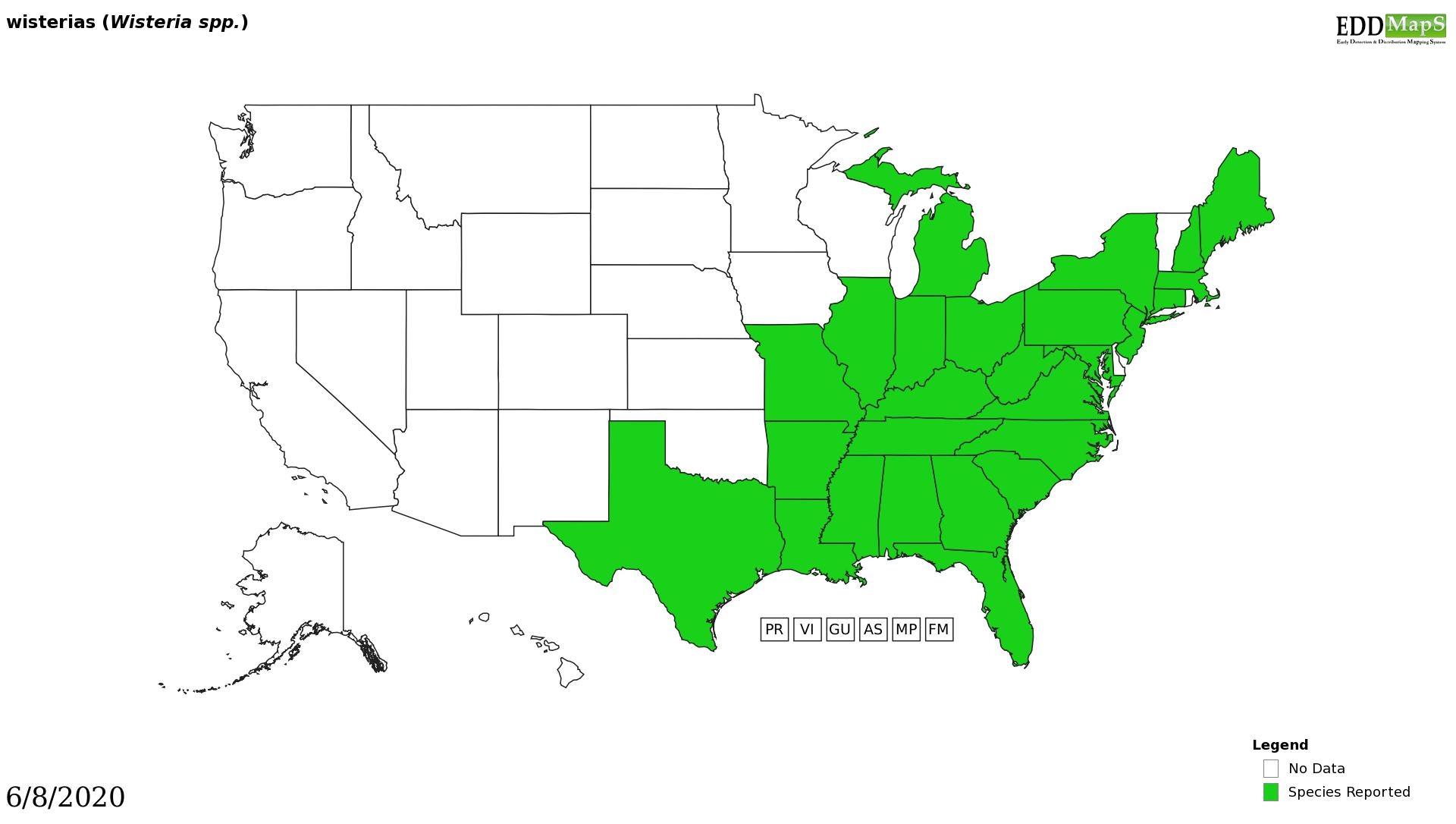 Chinese Kidney Bean, Kidney Bean Tree, Glicina, American wisteria
9/ 10
Wisteria (Wisteria frutescens) is an extremely hardy, fast-growing ornamental vine with high-climbing stems. It flowers between the months of March to May, where it produces dangling, stalked clusters of fragrant and attractive, lavender to violet sweetpea-like flowers. Flattened seed pods appear late summer, which are greenish brown to golden in color. Each seedpods contains 1 to 8 round brown seeds.

Toxic components
All parts of W. frutescens are toxic to poultry. It contains wistarine, which is a type of glycoside, and lectins. Ingestion of W. frutescens mainly affects the bird's gastrointestinal system. Symptoms can appear up to 24 hours after ingestion.

MECHANICAL CONTROL:
Cutting: Cut climbing or trailing vines as close to the root collar as possible. This technique is feasible on small populations, as a pretreatment on large impenetrable sites, in areas where a herbicide cannot be used, or if labor resources are not sufficient to adequately implement herbicidal control. This treatment will prevent seed production and strangulation of surrounding woody vegetation. Wisteria will resprout unless cut so frequently that its root stores are exhausted. Treatment should begin early in the growing season and be repeated at two-week intervals until autumn.

Grubbing: This method is appropriate for small initial populations or environmentally sensitive areas where herbicides cannot be used. Using a pulaski or similar digging tool, remove the entire plant, including all roots and runners. Juvenile plants can be hand pulled depending on soil conditions and root development. Any portions of the root system not removed may resprout. All plant parts, including mature fruit, should be bagged and disposed of in a trash dumpster to prevent reestablishment.

CHEMICAL CONTROL:
Cut Stump Treatment: Use this method in areas where vines are established within or around non-target plants or where vines have grown into the canopy. This treatment is effective as long as the ground is not frozen.

Glyphosate: Cut the stem 5 cm (2 in) above ground level. Immediately apply a 25% solution of glyphosate and water to the cross-section of the stem. This procedure may require a subsequent foliar application of glyphosate.

Triclopyr: Cut the stem 5 cm (2 in) above ground level. Immediately apply a 25% solution of triclopyr and water to the cross-section of the stem. A subsequent foliar application may be necessary to control new seedlings.

Foliar Spray Method: Use this method to control large populations. It may be necessary to precede foliar applications with stump treatments to reduce the risk of damaging non-target species.

Glyphosate: Apply a 2% concentration of glyphosate and water plus a 0.5% non-ionic surfactant to thoroughly wet all foliage. Do not apply so heavily that herbicide will drip off leaves. Glyphosate is a non-selective systemic herbicide that may kill non-target partially-sprayed plants. Ambient air temperature should be above 65Â°F.

Triclopyr: Apply a 2% concentration of triclopyr and water to thoroughly wet all foliage. Do not apply so heavily that herbicide will drip off leaves. A 0.5% concentration of a non-ionic surfactant is recommended in order to penetrate the leaf cuticle. Ambient air temperature should be above 65°F.